The demolition took place, despite Islamabad High Court and the Supreme Court of Pakistan having previously refused applications to bulldoze homes in the area. Read more (here) and (here).

Hundreds of Christian families were left sheltering under makeshift homes made of cloth and bamboo, or tents.

BACA visited the victim families and arranged a Christmas service and provided gifts of clothing and blankets, to bring some cheer to beleaguered families.  A hearty meal was also provided.

On 8th January a CDA demolition team returned to the slums and destroyed the remaining houses, obliterating the makeshift homes and tent in the process.

Hapless families have taken refuge at the homes of nearby relatives.

In a clear act of discrimination, Pak authorities in Islamabad have fulfilled their promise to return and destroy the remaining homes of Christians in H/9 Islamabad.  The 8th January 2023, destruction follows a previous demolition of breeze-block homes which occurred on 16th October 2022.

The visit by the bulldozers and JCB’s was very distressing for these families. Children could be heard screaming and crying as they watched bulldozers flatten their homes and makeshift homes. Families helped each other collect what little they could of their possessions.  It should be noted, however, that most had lost everything they owned during the last demolition.  This more current demolition seems simply an attempt destroy the last vestige of hope that Christians had been clinging too.

A woman screams about how she will will lose her life if need be protesting against the injustice.  While they were bulldozing her home she tells us that she said ‘Burn my possessions, burn my daughters dowry if you have to, but let me take my Bible.’ The woman was extremely distressed as she carried a baby in her arms. People gathered what few possessions they could an clumped them together in an area away from the demolition teams path.  Clearly many people were distressed.

The CDA demolition team was  lead by their Deputy Director, Muhammad Iqbal Mughal,  A large number of vans full of CDA workers, police and encroachment officers first entered the community and forced families out of their homes. Them bulldozers and JCB’s drove through the slums, uprooting and laying waste to everything before them.  By the end of the day barring huge piles of rubble the previous slums were reduced to flattened soil.

Christian homes uprooted and laid waste while the former owners watch in dismay, following the vehicles in macabre fashion not knowing what else to do.

The demolition team seemed intent on demoralizing Christian families.  They began by re-flattening the ground that was committed for rebuilding a church demolished on 16th October (click here). Worse still they initially refused to allow Christians to remove possessions from their homes.  This meant that many Bibles were desecrated causing increased consternation for Christian families. A lot of their possessions and makeshift home infrastructure was picked up and put into vans (families later discovered this was taken to a store house for resale to reimburse costs for demolition.

The CDA’s bigoted treatment of Christians living in these slums has been condemned not only internally by Pakistani politicians and by their media (click here).  Moreover, Members of European Parliament (MEP), have visited and offered support to these communities (click here).  When push comes to shove however, none of these voices have been effective in removing the threat to these long suffering Christians, and now hundreds more join the already internally displaced Christians.

These hard-working exploited Christians live hand to mouth, earning a pittance as domestic cleaners, sewage workers and sweepers.  Those that work for the local government provide a much need essential service, albeit the worst paying of all council work and often the most dangerous and unappreciated roles.

Christians were forced to watch as CDA vehicles tore their homes down.

“The evil men desecrated our bibles and sacred ground where they had previously demolished our church.

“They should be tried for blasphemy.

They destroyed many Bible while they tried to eradicate Christianity from this area.

“These people hate Christians, they have removed our homes but left the Muslim homes standing?

They want us dead or far away from here because they think we are haram (ritually impure).

They have destroyed everything we have so many times, and now we will have to start our lives again.

“Sabra Saed, a former local councillor and current leader for the community, said:

“We had just woken up from our sleep, had a little breakfast and suddenly swarms of men entered our homes.

“They began tearing down our makeshift homes by hand originally, while they shouted at us to get out of the way.

“Many of the workers called us Chura (filthy Christian) and kaffir (insulting term for non-Muslim).

“It was clear why we are being moved.

“Uniformed police officers prevented us from salvaging household items, we pleaded with them to give us access, but they ignored us.

“Even then some of us saved what we could but most of our goods were taken away, while we were powerless to do anything.”

“When the demolition was complete, I surveyed the flattened land and cried in despair – I was not alone in my tears.”

Mrs Saeed phoned 15 the emergency services line in Pakistan to seek Police assistance, when the Christian community started protesting against the desecration of Bibles. At around 5:00 pm the Station House Officer from I9 Police Station and Assistant Commissioner Muhammad Awais  arrived at Nawaz Sharif Colony.  He took notes of the community concern regarding the removal of the Christian homes and the desecration of Bibles,  AC Muhammed Awais spoke gently with the enraged community and assured them of his help. He advised  Sabra Saeed to visit the Police Station the next next to file a report and immediately began talking with senior officials of CDA at the demolition site.  During his discussions with them he was able to agree the return of tent and makeshift home paraphernalia i.e. bamboo poles, canvas and cloth.  Christian furore was assuaged to a degree by this small concession.  Most of these beleaguered Christians had nowhere else to go after all.  The realization that this is ‘just another reset of their lives’, is an automatic response for Christians after each debilitating demolition.

The next morning (9th January) Christian families arrived at the CDA store house and took back possession of their tents and makeshift home equipment. But heavy rains meant they could not re-fix their homes.

Amir Masih(26 yrs) a local resident of the slum, spoke with BACA, he said:

“It has been a terrible two nights for us.

“We were all forced to live at the homes of relatives and friends, because we had no shelter or cover.

“The first night we all planned to live in the open air together, so when rain fell we arrived at guest homes thoroughly drenched.

“Our women have been constantly weeping our children are inconsolable.

“We have become nomadic people through no fault of our own.”

For two whole days and nights, torrential rain fell.  Land was too muddy to rebuild homes during that period and the sense of homelessness and helplessness demoralized a community that are very aware of their pariah status.

“Some people have now re-built tents, I am one of them.

“But it has broken all of us that we are repeatedly having our homes bulldozed.

“Each time, more of our pride is eaten into.

“Each time, everything we own is destroyed, damaged or stolen.

“Each time, our zeal for life is permanently damaged.

“We are broken people, with little hope and nowhere else to go.

I cry at night in private, most men do when women and children are asleep we can’t let them fall in despair, we just push through the hate and begin again.”

Mrs Sabra Saed, has been very positive about the interactions with senior police officers, involved in their case.  She explained how mothers were distraught that their daughters dowries (marriage gifts to fiancés) had been stolen by the CDA.  AC Muhammed Awais not only organised for the community to get their possessions back including their home paraphernalia, but also all their valuables.  This is a first for the community. He also sent five degs (extremely large pans) of rice for the community on 9th December. His provisions ensured the local Christian families had food to eat when nothing was available to them.

On 11th Jan, Sabra Saeed called our Operation Manager and the community have requested help with food and blankets. We need to create an emergency fund of £2000 to ensure we can help these families through these difficult times. If we raise a further £2000 it will enable us to commission an advocate to represent families and terminate this inhumane treatment. We have opened an appeal and if you have been moved by the situation of these families, you can donate.

Our team arrived on site on 13th January. Our Operations Manager at the time said:

The community has not yet rebuilt their tents because it is raining here.

However some have built shelters with the remains of tent sheets and bamboo poles.”

After the rain stopped some makeshift homes were raised overnight.

Some of you will be aware that BACA visited the slum on 26th December 2022, to celebrate Christmas with beleaguered families (click here).   We gifted children with warm clothing and also provided families with blankets to keep warm during winter, but it seems these gifts have now gone missing.  We have a lot of work to do to make life comfortable for these families.

“Life for Christians in Islamabad Slums is tough as they are seen a s a local blight.

“Many of them have moved here because Muslims have forced them out of their homes elsewhere, others are seeking work and no access to a public benefits system.

“The CDA seems adamant that they will eradicate any presence they can, of Christianity from the Islamic Capital of Pakistan.

“So the painful demolitions will return periodically, even though few terrorized families permanently disperse from the area and many have lived here for decades.

“It is not known if this demolition process is legal, but we are aware that the High Court and Supreme Court of Pakistan has previously rejected applications for demolition.

“Moreover, the country’s own Federal policy for housing states that such demolition cannot take place without first finding alternative housing for these families.

“If we raise enough funds from our appeal we intend to secure an advocate to represent these families and the tens of thousands more, in other Islamabad slums.

“For definite this brutal and ostensibly, to some extent, genocidal treatment of Christians must be stopped.” 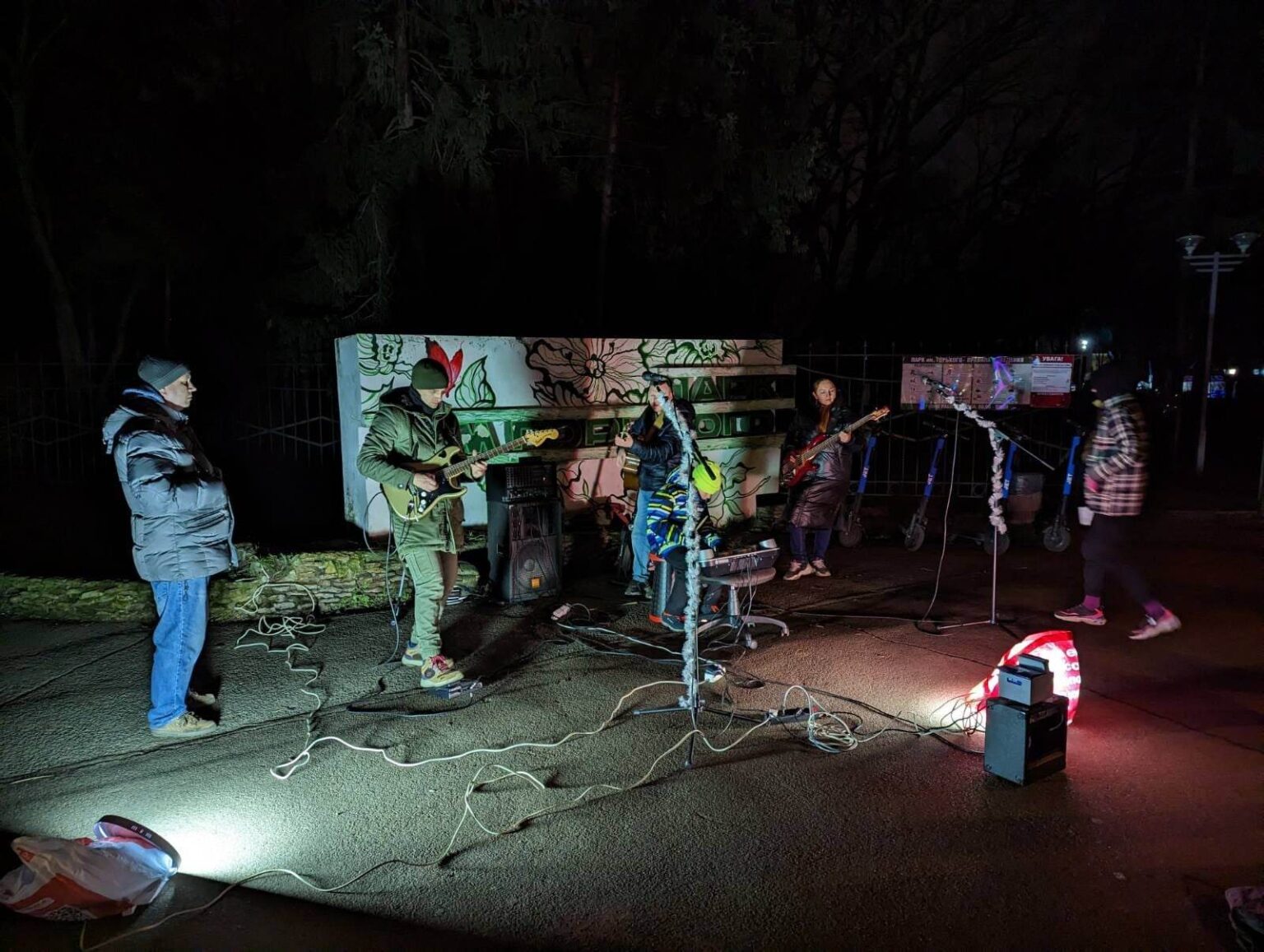 London: (By Hannah Chowdhryand Juuliet Chowdhry)  he people of Odessa and other cities in Ukraine were plunged into darkness from 11th De