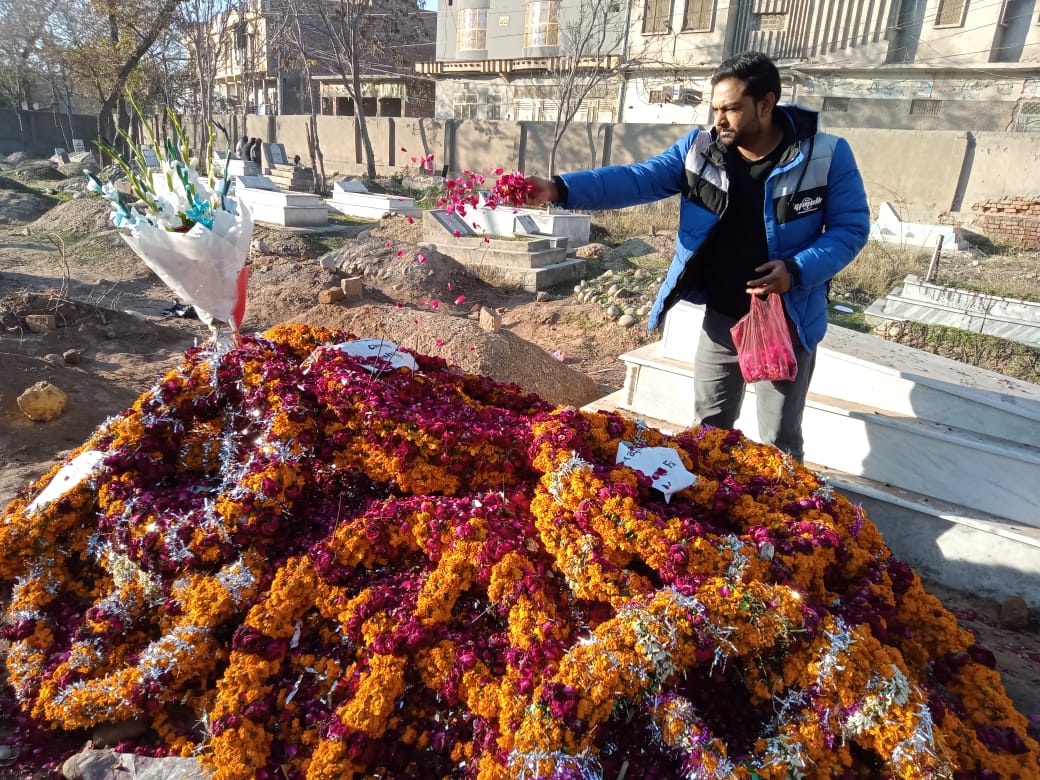 London: (By Hannah Chowdhry) On Monday 31st January the funeral rites of Pastor William Siraj who was shot dead in a terrorist attack, were performed at All Saints Church, Peshawar.

Thousands of Christians from around the county attended his funeral.

Memorial service at all Saints for Pastor William Siraj (RIP)

BACA representatives also met with attack survivor Pastor Patrick Naeem and we presented him with a bouquet of flowers.

“We have no enmity with anyone.

“The Church has been persecuted for ages.

The persecution of the people of the Lord is not new”

“It’s the Lord’s will which has been done.

“All Saints Church was attacked by terrorists in 2013 in which my sister Shumila Robin lost her husband.

BACA offered to cover the cost of the funeral which Adan politely declined saying:

“You have come share our pain and show us your love.

“It’s enough for us”

Pastor William Siraj and Pastor Patrick Naeem were shot at by gunmen on two motorcycles while driving home after a service At All Saints Church, Peshawar, yesterday.  Read more .

All Saints Church also witnessed a terrorist attack in 2013 and BACA were actively involved in bringing comfort and solace to over a 100 families at the time.  Read more (here) and (here).

Before they could finish their journey two motorcyclists, one wearing a helmet and the other a headscarf rode in front of them.  Both riders then aimed pistols at the car of Pastor Naeem and let fire, they then fled from the gaze of the many people who saw the attack near Madina Market.

Police reached the crime scene within 30 minutes, cordoned of the area, gathered evidence and recorded the statements of several eye witnesses. Despite a large number of witnesses police do not have registration details for the motorcycles and the armed gunmen have not been identified.  However, CCTV footage is also being checked for any information that can lead to the arrest of the gunmen.

“The attack on the Christian community was tragic.

“According to initial reports, there were two attackers involved in the incident.

“A comprehensive investigation has been launched,

“Members of the minority community were targeted, this is a terrorist act.”

“In the past, the police have identified the perpetrators of attacks targeting minorities

“the same would also be done in this case.

“We are conducting geo-fencing and looking at other data.”

On 31st January after a post-mortem emergency services handed over the dead body of Pastor William Siraj to his family. The last rites for the Pastor were carried out at All Saints Church, Peshawar at 2:00 pm today.

Clergy of Church of Pakistan from around the country arrived at Peshawar to attend the funeral of Pastor William and to say their goodbyes or pay their last respects. Pastor Patrick Naeem also attended the funeral, he had recovered well from his injuries after treatment at Lady Reading Hospital, Peshawar.

An extremely large number of Christians from different walks of life arrived at All Saints Church to attend the funeral of the deceased, the number was over a thousand. Our BACA representative in Peshawar also attended the funeral and left flowers on the coffin of Pastor William as we too said goodbye to a faithful servant of Christ.

Bishop Azad Marshal has demanded the protection of minorities from the Government of Pakistan. He tweeted:

Tomorrow the BACA team shall be visiting the family of Pastor William Siraj and Patrick Naeem. We will be offering to cover the  medical costs treatment of Pastor Patrick Naeem, who survived this attack.

Mourners sobbed at the funeral of a much loved Pastor

“The burial of Pastor William Siraj was a sombre event but the huge numbers that gathered, illustrates how far the impact of his death has been felt.

“The passing away of a Pastor in such a violent manner has been a real shock to the community.

“The fact that the killers are not known and are still able to enact more carnage is a frightening prospect.

“Especially for those at All Saints, who have already suffered the worst terrorist attack on a church in Pakistan’s history in 2013.

“The Pakistani Government have failed to protect our minority and this takes an increasing toll on the Christian community’s morale.

“Even then we continue to go to church, we pray and we trust God.

“When will these terrorists realise that their attacks serve only to galvanise us.

“They can kill our friends and our families, they can end our earthy bodies, but in the end we will gain eternal life.

“That is something  Pak Christians are not willing to relinquish.”