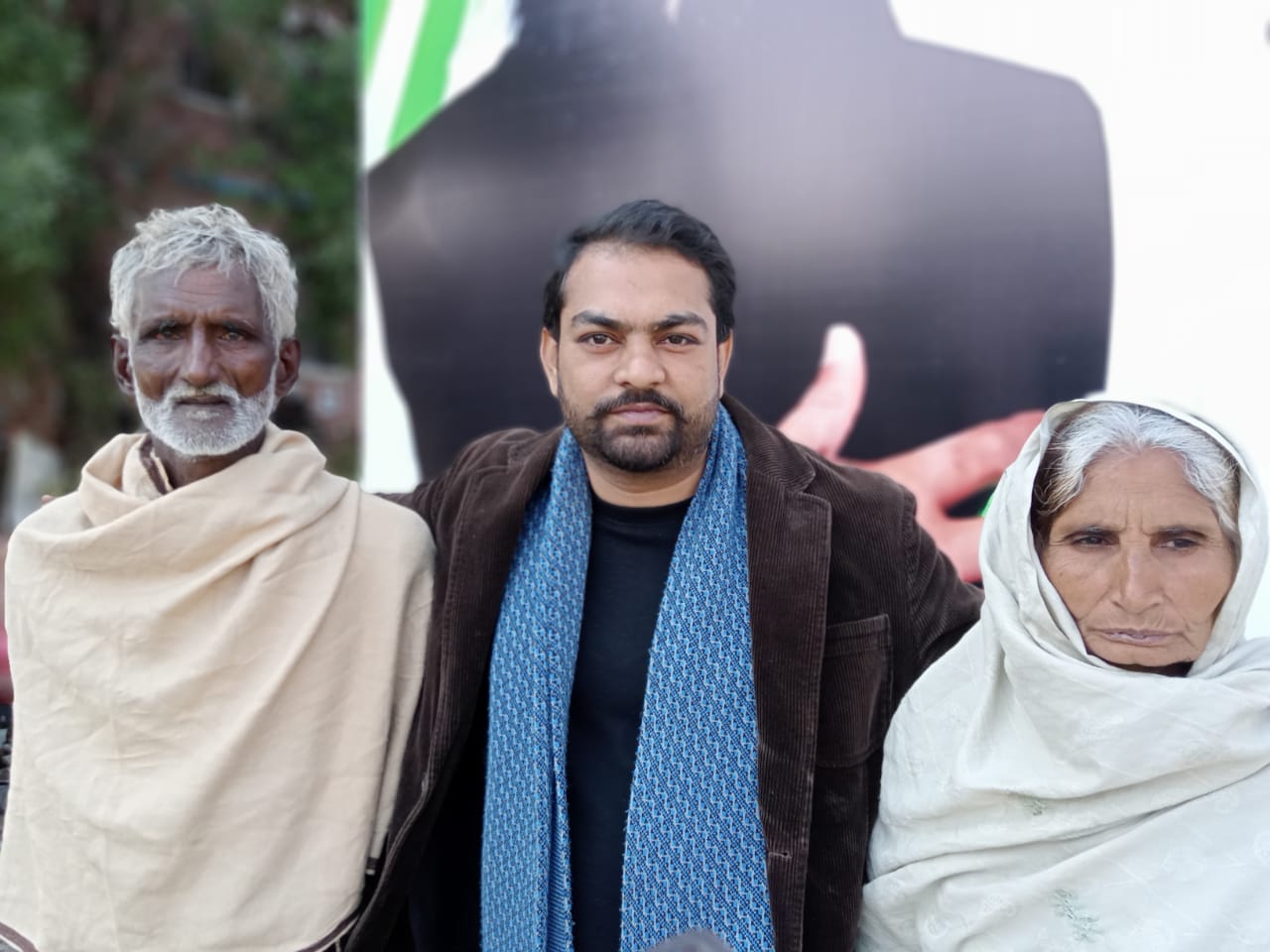 The parents of a young Christian man who just before dying, told his parents he was raped by two Muslim friends and then had a high pressure air nozzle shoved into his anus, have expressed their satisfaction at a court decision on 25t January to impose life sentences on both murderers.

This success and the speed of it illustrate how effective BACA has become in challenging for the rights of Christians in Asia.

BACA estimates that 700 Christian men and boys are sodomised in Pakistan every year.

We believe this is a result of sexual neuroticism generated by sexual repression and that Christians are targeted as Pakistani authorities ignore their complaints.

35 year old Christian labourer Shehzad Masih, known to be a hard worker was killed by two Muslim neighbours, who burst his intestines by inserting high pressure air into his anus (click here).

Two other men were initially implicated [for diverting the course of justice] in the murder, but cases against them were dismissed following police and court review of CCTV  recordings (click here).

It is believed that before he died Shehzad Masih was sodomized by the two Muslim men.  The brutal use of high pressure air in such sickening fashion is believed to be have been an attempt to hide a sexual offence the men committed.

British Asian Christian Association, has funded a legal prosecution of the murderers since Shehzad Masih’s murder on 19th July 2021.

But justice was thwarted through police dithering, unprofessionalism and corruption that in the initial phase of court action resulted in failed submission of charge sheets.

However by August 2020 murder charges had already been framed against the two murders Muhammed Faizan and Muhammed Abdullah.

On 15th November 2021 following the rejection of a post-arrest bail for one of the murderers confidence grew that  we were nearing a successful conviction.

On 3rd December doctors involved in treatment for Shehzad while in Allied Hospital were called to record their statements in the court.

On 9th December Medical Officer, Dr. Zain Ummer of Allied Hospital recorded a statement confirming that the death of Shehzad Masih was caused by injuries in the intestine. Excessive perforations lead to septic shock.  He also confirmed that he believed the trauma had been caused by a high pressure air nozzle inserted into the anus.

On 16th December, Investigation Officer, Muhammad Tariq recorded his statement in the court. He stated:

“on 06th August 2021, I produced both the accused before the learned magistrate who sent them for judicial lockup. Both the accused persons were found guilty in my investigation.”

He also stated that both the accused willingly confessed their crime during an investigation at the police station.

On 24th December, the defendant counsel was advised to prepare the statements of the accused under section 342 of Pakistan Criminal Procedure code.  Muhammad Faizan and Muhammad Abdullah could not proceed however as their defence counsel did not appear at court.

Onn 5th January 2022 the statements of the accused could not be heard due to bar elections taking place in  the court.

“Both of the accused have changed the primary statements they had given at the police station during the crime investigation.

“The charge sheet has proven them guilty of the murder of Shehzad.

The final arguments were heard on 19th January and Judge Muhammad Shehzad Ahmad fixed 26th January for the decision.

On the evening of 25th January, BACA called  Shareefa Bibi finalised preparation’s for travel to the court. Shareefa was feeling restless and panicky as she was very aware that the judge was going to give his judgment for the case and she had been waiting a year for justice. Shareefa asked our officers to pray with her and for 30 mins the three of them prayed for a just outcome.

On Wednesday 26th January BACA team arrived at Faisalabad District Court early with the family and further prayers were said.  The elderly parents of Shehzad Masih were encouraged by the prayers and the confidence of

After dealing with routine hearings all morning, Judge Shehzad Ahmad went into his private chamber and called the court clerk in to write the judgment.  At  2:00 pm all parties were invited back into the court to hear the decision.

Father Yunas Masih and mother Shareefa Bibi, with our BACA officer, celebrate the court decision to give life sentences to their son’s murderers.

Both Muhammad Faizan and Abdullah were found guilty of the murder of Shehzad Masih.  Judge Ahmad declared that the prosecution had proved the crime without any doubt and ordered a punishment of  life imprisonment and 200,000 Rs fine each.

The parents hugged BACA officers and Advocate Taswar Tallat Rana, thanking them for their help and support. It was a very emotional moment for both parents who broke our in tears and prayed for the Judge as well.

By now you will all have realised that the loss of the son has hit both parents very hard, Yunas Masih, has been able to speak little about it publicly. Shareefa, can be heard in this video which shows Shareefa praying before the court hearing and her first statement after the verdict was shared:

Shareefa Bibi, Also spoke with us and said:

“I have no words to thank you.

“I pray God to bless you so you may continue helping others in need.

“I am thankful to BACA for helping me and supporting me through my my family’s hard time.

“Without you it would have been impossible for me to fight for justice for my dear son.”

BACA officers had made it very clear to Shareefa and her family that they will remain in contact with the family.  We will continue to help them receive the compensation that is due to them (though the money has never been a priority for the family). We will also help them with further legal support should any appeal be filed at any stage during the incarceration of the culprits of their sons’ murder.

“I cried when I heard this result.

“The parents of Shehzad Masih have suffered threats, abuse after the loss of their only and very dear son.

“This elderly couple held firm and resolute and their stoicism allowed us to gain a legal victory for a murder trial in under a year [Faster than cases enacted by Pakistan’s mega rich] – the speed of this verdict is a first for our community.”

British Asian Christian Association is changing the political and legal landscape for Christian in Pakistan.  We are by far the most successful group challenging for equal rights and protection for Pak-Christians. In particular the speed of this murder trial has been quicker than cases involving Pakistan’s super rich – we are becoming very efficient.  We would not be successful without the help of our donors and want to continue to expand our work with your help,  If you have been moved by the account shared above please help us to reach more victims by donating (here).

“Though Shehzad Masih before he died spoke of the non-consensual sodomy he suffered from the men that murdered him, the crime was ignored by the courts.

“Pakistan openly outlaws gay relationships, yet we are finding Christian boys and men are increasingly been targeted for such sex offences.

“700 Christian girls are estimated to be abducted, raped and forced into Islamic Marriage every year, because of their low social status a consequence of their faith.

“BACA estimates an equal amount of Christian boys and men are being subjected to forced sodomy, by Muslim men intent of fulfilling their desires, despite the illegality of the act.

“Christians make easy targets for sexual predators because, police ignore their calls for help, courts rarely convict sex crimes against Christians and because the nation continues to hide the abuse to ‘protect Islam’.

“We hope to win one court case for forced-sodomy soon to bring this matter to the fore of public debate.”

Whoever voluntarily has carnal intercourse against the order of nature with any man, woman or animal, shall be punished with imprisonment for life, or with imprisonment of either description for a term which shall not be less than two years nor more than ten years, and shall also be liable to fine.

Explanation: Penetration is sufficient to constitute the carnal intercourse necessary to the offence described in this section.